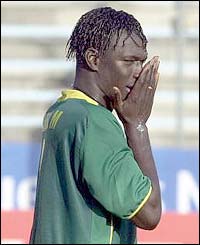 Mahamadou Diarra’s agent has denied that the Malian midfielder is in talks with Real Madrid and Manchester United.

Frederic Guerra dismissed Spanish press reports on Monday that claimed he was in talks with both clubs over a transfer for the Lyon player.

Madrid daily newspaper AS had claimed the 25-year-old broke off negotiations with United and told Guerra he wanted to join Real instead.

“I have never spoken to the journalists at AS, not anyone else,” Guerra said.

“I don’t know how I am supposed to have met the Real management seeing as there isn’t one at the moment,” he added referring to the ongoing presidential election campaign at the club. And to conclude a transfer, the two clubs negotiate the fee amongst themselves without any input from the player’s agent.

“I have not had any approaches concerning Mahamadou Diarra from either Real or Manchester,” added Guerra before adding that the Mali international has three years remaining on his contract with the five-time French champions.

According to As, Guerra had agreed a transfer fee of US$38m with the English Premiership giants and the duration of the contract, and all that was required was the player’s signature – but Diarra broke off negotiations with United.

The paper claimed the midfielder then told his agent that “he prefers to join Real Madrid and that he will not reply to Manchester, something that has angered the English club.”

They claimed Guerra will meet with Real’s chiefs to express Diarra’s desire to join them.