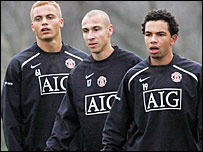 Manchester United manager Sir Alex Ferguson claims that he is not thinking about extending the loan deal of Swedish striker Henrik Larsson.

Larsson, 35, who scored on his United debut in Sunday’s FA Cup win over Aston Villa, signed from Helsingborg on a three-month loan deal this month.

Ferguson said: “Henrik is here until 12 March, we are not looking beyond that. It’s not pertinent at the moment. It wouldn’t be fair to put Helsingborg under that type of pressure.”

Earlier this week, the Swedish club said they would allow Larsson to stay on at Old Trafford until the end of the season.

“If he wants to stay then we’ll open that discussion with United. We will not stand in his way,” said chairman Sten-Inge Fredin.

But Ferguson is refusing to look that far ahead and is concentrating on the short-term benefits Larsson can bring to his team.

“Henrik is enjoying playing here and that is the way we are going to leave it,” added Ferguson.

“Henrik’s first game was excellent for us. It gave us an insight into the type of player he is, he can be a fantastic asset to us. He may not play all the games but the important thing at his age and with his experience is he will understand that. He has an important role and we will use him when he is fresh.”

Earlier this week, Larsson indicated he fully expected to return to Helsingborg in the spring.

“It is a three-month loan deal and I have to be back when the Swedish league starts,” he said.