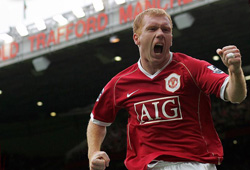 No matter how disappointing the games against Reading and Pompey might have been, there are several positive signs to take with us in the next games.

Our defense is solid, rock solid. Even if the lads still haven’t shown their best performances, and Neville isn’t back yet. Even if Rio and Vidic aren’t there yet where they were last season. The defense will be hard to beat. Just ask Chelsea how hard it was for them to break through. Malouda’s strike was marvelous, but he first had to make sure Ferdinand couldn’t tackle him anymore. The quartet Neville – Ferdinand – Vidic – Evra once more will be feared.

We can control a game and set pace. We can make it hard to other teams, no matter who they are. The first half against Chelsea, the whole game against Reading, and even last night’s first half against Portsmouth we dictated the game. No one could come close to us and ManU played a very fast paced game during those moments. This is exactly the game required to move to the top, take them by the throat and impose our style. Don’t offer the others a chance, push them in to defending from the first minute.
This is what ManU is about: entertainment! Offensive football.

We can create chances. They might not be as outspoken as we’ld love them to be, but watch out for our second line! With players such as Carrick and Paul Scholes we can score many goals from outside the box. Scholes’s goal yesterday was a cracker!
Tevez, Ronaldo and Giggs all have a nice curl too and never will we forget Rooney’s rocket against Milan last season!
Yesterday Nani and Tevez both had great chances and only a brilliant James saved Portsmouth. Reading’s Hahnemann was the best goalie of gameweek 1 and no one else than Cech allowed Chelsea to go to the penalty road during the Community Shield.

So far our biggest problem has been that we didn’t bounce back when the opposition scored. Both against Chelsea and Pompey after the equalizer, we started to play slower, combined less and our passing became less accurate. Is this due to the young age of our midfield/attack? Is this a lack of experience in being a champion? Are we too cocky?

Luckily we have derby weekend now and what else can wake us up better than a game at Eastlands? I couldn’t think of a better moment for this game. This is exactly what we need to bounce back, derby weekend.
Sorry Sven, but your star is bound to fall on Sunday! Hope you enjoyed the first 2 gameweeks, because that’s all you’ll get this season.

Anyone seen two guys with a light blue carpet? The police is looking for them, they have emptied City’s trophy room.