Manchester United striker Javier Hernandez has voiced his frustration over his lack of game time once more under David Moyes.

The 25-year-old has been selected for Mexico’s international friendly with Nigeria, with the striker desperate to prove himself after a frustrating season,

END_OF_DOCUMENT_TOKEN_TO_BE_REPLACED

What better could a United fan ask for.The match was on the minute ref blew the whistle.For the first time  team selection was perfect. Defense looked better in shape and mid-field just required as to be aggressive.
END_OF_DOCUMENT_TOKEN_TO_BE_REPLACED 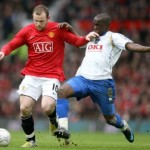