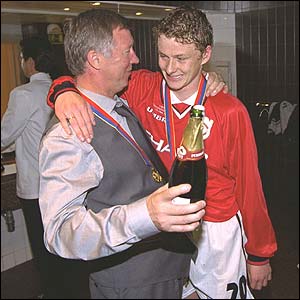 After a not to brilliant prem start for us, we finally got our first win on Sunday. But the month of August 2007 continues to be a somber month for ManUtd and its fans.

Yesterday a legend retired. The legend who won us the Champions League in 1999, scoring the 2nd goal, 3 minutes in injury time against Bayern Munich. Thank you, Ole Gunnar Solskjær (20)!

Ole joined OT in 1996, from Molde in a £1.5mm move to OT. He debuted for ManU 26th August 1996 against Blackburn Rovers at OT, scoring after only 6 minutes. The same season he scored 18 times and helped us win the Title.

Solksjaer was 11 seasons active as a ManUtd player, last years plagued by injuries. Ole also featured on our squad list, but never played any minutes for the Red this Season. Ruled out with a knee injury since February 2007, Ole never really came back for us anymore, although he made an appearance, and scored, against Blackburn Rovers later in the season.
“Baby-faced Assassin” made 366 appearances for ManU, scoring 126 times in total, but his most memorable moment was when he hit the ball high in the nets of Oliver Kahn, at Nou Camp Barcelona, in the last minute of added time. This goal help ManU win the 1999 Treble, bringing the Champions League back to OT after we had won the “Cup with the Big Ears” in 68 already.

After knee surgery in August 2004, Ole was sidelined the whole 2004-2005 Season. While struggling to find his form and spot in the United squad back, the Stretford End fans eternalized Solskjær with a banner reading
20 LEGEND to show the eternal support of fans.