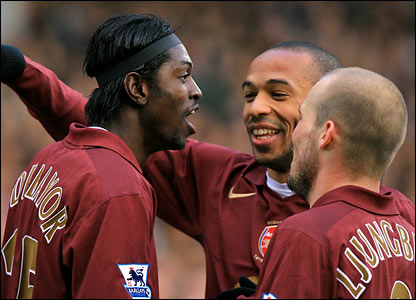 Emmanuel Adebayor scored five minutes from the end to give Arsenal a first Premiership victory of the season and halt Manchester United’s winning run.

United debutant keeper Tomasz Kuszczak had earlier saved Gilberto’s penalty after he had brought down Adebayor.

Arsenal needed keeper Jens Lehmann to preserve the win, with an astonishing late save from Ole Gunnar Solskjaer.

With Thierry Henry unfit, Arsenal strung five across midfield, with Adebayor asked to plough a lone furrow up front at Old Trafford.

But Arsenal’s midfield quintet were completely bypassed by Mikael Silvestre’s diagonal ball in the first minute, which found Darren Fletcher breaking into the box, but William Gallas blocked the shot with a well-timed challenge.

Edwin van der Sar’s failure to shake off a stomach bug handed Kuszczak a debut and his initial action in a first-team shirt was to haul down Adebayor for a penalty.

Gilberto’s standing foot slipped as he struck the kick, allowing Kuszczak to atone for his error by plunging to his right to save.

The Polish keeper’s stock rose even further when he parried Adebayor’s powerful header against the post and Paul Scholes was on the line to clear the ball away from Gallas.

With Freddie Ljungberg, Aleksandr Hleb and Rosicky pushing on from midfield, Arsenal worked the ball slickly to make light of Henry’s absence – and Kuszczak was called into action to beat away Tomas Rosicky’s powerful shot.

Both goalkeepers were hogging the action and Lehmann’s sloppy throw led to the ball ending up at Ronaldo’s feet and the German had to redeem himself with a sharp save.

United’s major players were struggling to make a first-half impact, although Ronaldo made one on Lehmann, whose half began with him seeing a yellow card and ended with him seeing stars as he blocked the Portugal winger’s shot with his face, knowing little about the save.

Arsenal’s management of the ball was sublime at times and their five-man midfield made it difficult for United to pick their way through, forcing them to play long balls.

The direct route almost paid off when Louis Saha flicked the ball on to Fletcher and hared into the box to meet the cross and glance a header inches wide.

Adebayor was given a chance to run on goal by Ronaldo’s sloppy pass but the Togo striker’s finish was unconvincing, providing Kuszczak with an easier save than he might have expected.

John O’Shea then gifted the ball to Julio Baptista and watched with his heart in his mouth as the Brazilian substitute drove on to thump a shot inches wide.

There was no hint of either side settling for a draw and in a gripping finale Arsenal took the lead.

Fabregas caught Ronaldo in possession 45 yards out and – following a twisting run – threaded a perfect pass for Adebayor to slide the ball past Kuszczak.

Rosicky– was the difference between the two teams on the day.