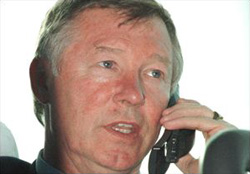 There’s a problem in this country. It’s called London.
Not only does the town deliver us marvelous football clubs such as Chelsea and Arsenal, albeit without foreigners ruling the squad those teams would be forgotten rather fast, but also in London, there’s no respect for people who have really rule the game.

Yesterday, our Boss, Sir Alex Ferguson was assaulted at the Londoner train station Euston, when attending a function in the capital.

Carlos Tevez, and his compatriot Javier Mascherano, are in the middle of a tax row in Brazil. The Brazilian authorities are investigating allegedly financial irregularities at Corinthians, for whom both played before they moved to West Ham, another Londoner club. The scandal involves 4 players from MSI, the company run by Kia Joorabchian: Tevez, Mascherano, Carlos Alberto (Werder Bremen) and Ricardinho (Besiktas).
When found guilty of evading taxes, the stars could face jail sentences from 2 to 5 years.