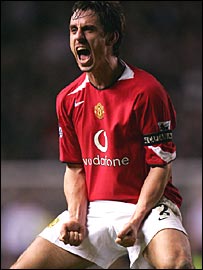 Manchester United boss Sir Alex Ferguson is not worried about the hostile reception Gary Neville will receive at Anfield on Saturday. The FA Cup fifth-round tie kicks off at 1230 GMT, just a month after Neville controversially celebrated United’s late winner in front of the Reds fans.

The Times reported Fergie as saying:

“It is obvious Gary is going to get stick. It will be incessant, but I don’t think it will affect Gary. It will probably just drive him on. I do hope we don’t reach the stage where it starts affecting referee Howard Webb’s performance. This is a big test for him. It would be very easy to react to the amount of stick Gary will have to take.”

Neville’s actions only intensified the rivalry between the two clubs and on Friday, referees’ chief Keith Hackett was forced to deny reports that the United captain would be warned about his behaviour. Ferguson’s Liverpool counterpart Rafael Benitez is hopeful that the home fans will focus on backing their own team. As he said to The Sun:

“It will do more good to support our own players. We are only concerned with the game and the right atmosphere, we must set an example to children by avoiding doing such things. If people end the game talking about the match, the goals we have scored, I will be happy. If people are talking about other incidents, I will be disappointed. Before we played Arsenal people were talking about our record against the top sides, but little by little we’ve been making the improvements we need to get to a level to beat the best. I think being at home is a big advantage to us because our fans make a big difference.”p>

While Liverpool have home advantage, they head into the match with a woeful FA Cup record against United. If Benitez’s side prevail, it will be only their third triumph over United in 11 attempts and their first in 85 years. But a 1-0 Premiership win over Arsenal on Tuesday has given the Reds a timely lift.

There is no doubt that, Chelsea aside, United and Liverpool are the best two teams in the country right now. With United’d attack in a rich vein of form with Giggs, Park, Ronaldo, RVN, Saha and Rooney- all showing their class- and Liverpool’s defence in consistent, stubborn meanness with Finnan, Hypia and Carragher- it has all the makings of a true classic…..