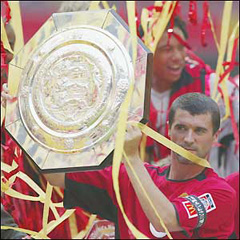 Today the 2007/2008 Season really starts for ManU with the Community Shield game against the smallest club of the English Top 5, Chelsea FC.

Last 3 weeks ManU has played several friendlies and SAF had time to introduces all the new players, with Owen Hargreaves featuring in a ManU shirt for the first time yesterday afternoon, in the 3-1 won game against Peterborough.
With the exception of Carlos Tevez, every newcomer has had the occasion to showcase why they were brought to OT, and none has failed to grab the opportunity.

Nani, Luís Carlos Almeida da Cunha, made his debut in the game against Shenzhen FC and immediately scored. Nani also scored in the following friendly against Guangzhou Pharmaceutical.
Nani and SAF made the headlines, with the gabber prohibiting Nani to further celebrate goals with his beloved somersault. Maybe soon we’ll see wheelbarrels!

Anderson, Anderson Luís de Abreu Oliveira, debuted on Thursday in the Doncaster friendly, playing 45 minutes and immediately showing the world what we can expect from him in the next years.
The impression Anderson left on me was a mix of both Rooney’s and Ronaldo’s style. Anderson surely can compete with Wayne in his first two years at OT, when it comes to run mileage and just like Cristiano he has a great ball control, but in several moments he didn’t know what to do with the ball and whether ran dead or passed the ball rather unimpressively. Notable is that he passed the ball many times after only 1 or 2 ball touches, proving that he’ll perfectly fit the fast paced English and ManU style.
Watch this boy, he is set to become the perfect replacement for Ryan Giggs.

Owen Hargreaves debuted the second half in the Peterborough game, quickly showing what his trademark is: long runs with the ball, starting from the defensive line and pulling the game open with long crosses.

With Carlos Tevez, who’s move finally got finalized on Friday, still to be presented, ManU is set to play for the next years among the world’s elite and grab several international prices, with a fast and very attractive game.