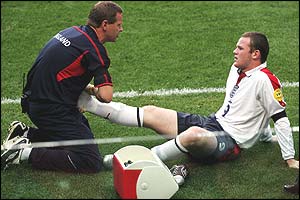 Wayne Rooney is awaiting the verdict from doctors after a scan on his broken foot that could determine whether he plays any part in the World Cup.

The striker spent 25 minutes inside the clinic, accompanied by FA executive director David Davies and team doctors from Manchester United and England.

The 20-year-old is in a positive mood after telling England coach Sven-Goran Eriksson he expects to play in Germany.

Eriksson said to the BBC:

“I am confident and he is 300% confident he will play. I have been saying for one month that I’m sure he will take part.”

United’s doctor Tony Gill and physio Rob Swire are now expected to discuss the results with England team doctor Leif Sward and specialists at the hospital.

If they cannot come to an agreement over his fitness then an independent consultant could be drafted in to make the decision.

Eriksson will then be informed by phone how the recovery is progressing and whether Rooney can fly back to Germany and re-join the squad to continue his rehabilitation.

If not, his place will be taken by Jermain Defoe of Tottenham, but it is possible that an announcement may not be made until early on Thursday.

The deadline for a decision on whether to replace Rooney in the squad is Friday at 1400 BST, 24 hours before England’s opening game against Paraguay.

Eriksson has remained confident Rooney would make it since he suffered the injury in April, and has been boosted by the striker stepping up his training in the last few days.

“I think he looks very good – but let the surgeons and the specialists have their say. I look forward to the point when we don’t discuss scans and Rooney’s foot any more. Very soon we will know what is going to happen about him but I have always said I think he will be ready.”

The Manchester United player spent Tuesday’s training session in Buhlertal, near the squad’s base, with one of the England physios going through some sprinting skills and some limited ball work.