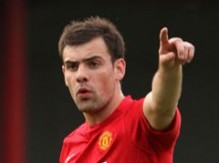 Gibson made 14 appearances last season, scoring three times, one of them a hurler in the last game of the 2008-2009 season, against Hull. He also participated to the complete and winning Carling Cup final. Chances to see Gibson receive even more time on the pitch will probably increase every season as he is highly talented and has a very good position game.

20-Year old Richard Eckersley has agreed a deal with Burnley. Although he came through the ManUtd ranks the Salford bloke opted to turn Old Trafford the back. Burnley will have to pay ManUtd a compensation fee as the player is younger than 24.