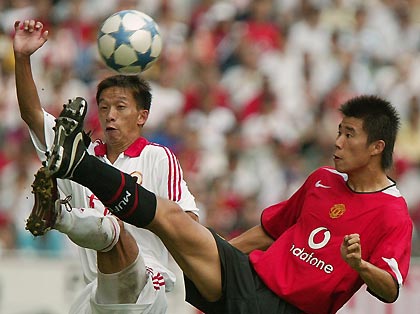 Dong was granted a work permit in December, and his new deal will keep him at Old Trafford until 2010.

The 21-year-old signed from Dalien Shide in January 2004 for Ł3.5m and was loaned to Belgian club Royal Antwerp.

“We’re all excited he has eventually arrived and can start playing.”

During his time in Belgium, Dong scored 36 goals in 61 games for Antwerp.

“He sacrificed two-and-a-half years at Antwerp, which showed great patience and determination. He’s quick, athletic and he can only improve by training with the first team squad here.”

Dong’s only previous first-team appearances came in non-competitive matches on Man Utd’s pre-season tour of South Africa, where he scored the winner in a match against Kaiser Chiefs.