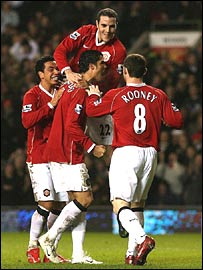 Sir Alex Ferguson is quite a happy man these days what with the way the Red Devils are performing right now. As the team heads into the final legs of the Premiership title race, it is becoming more and more apparent that the team is coming in strong and are the favorites to once again grab a title this year – finally ending a three year slump that saw the world’s most popular football team failing to win a championship.

With just 13 games remaining for MU, the team only needs to win 11 of those in order to clinch the championship after they recently routed Waterford 4 – 0. In an interview, Sir Alex said that the team has the “bit between our teeth now”. He is confident about the team’s chances of clinching the title this year and has even been confident enough about their standings to give starts to players like Kieran Richardson, John O’Shea and Tomasz Kuszczak.

This could be the year when MU fans will have an early Christmas.