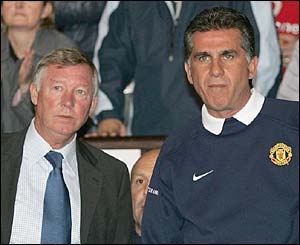 Boss Sir Alex Ferguson says Manchester United side are determined not to let Chelsea win the title against them when they meet on 29 April. United visit Stamford Bridge with Chelsea needing only a point to earn back-to-back title triumphs.

Ferguson said to the Daily Express:

Jose Mourinho insists he does not care who his side confirm their Premiership crown against and seems determined make sure his side do not ease up after their run of three successive victories.

Mourinho said to the Sun:

“We are very close but not there yet and now I just want to be the champion. Some people prefer to win it at home, some away, but for me the thing is to beat Manchester United and if we do that we will be champions. If it was Blackburn or Newcastle, the desire would be the same. You cannot choose. The supporters want us to be champions at home so they can give us an extra push – and maybe that will take us to the silverware. For me it is important to finish in front of Manchester United. I have always said that the best team wins the championship because it is 10 months long and it is not about luck or mistakes. The best team wins so if at the end of the season we finish first, I am very happy.“