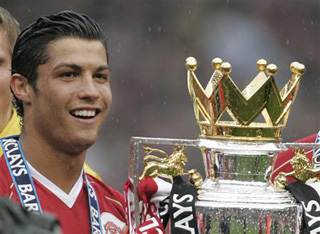 Although Fergie believes that he has mellowed over the years, as he said in a morning interview with local radio station Key103, Cristiano told The Sun in an interview that Sir Alex still has got the touch, the hairdryer.

The boss said that time and life, have mellowed him, but accepts that some younger player are afraid of him.
Cristiano Ronaldo confirmed that Sir Alex the roll of the father figure has, but still knows how to get angry.

“Alex Ferguson shakes me up and screams at me now and again.”
“He is like my mother or my father. He sets my limits and my aims.”
“People say he is less explosive than before, but he can still get angry.”
“He has often shouted at me during half-time, but always to make me progress. He is fair.”

Or in the words of Fergie

“On a Saturday, if you’ve not won or not played well, it’s important to get the message across because winning’s important at our club,” he told the Daily Mirror.”
“With the preparation we give the players every week, nobody ever gets criticised in training. Everything is positive so, therefore, on Saturday, you expect a result.”
“With all the work we’ve put in as coaches, the preparation we put in, the time spent going through video analysis, all the physical preparation and the medical care they’ve got, we expect a result.”
“So I always believe in telling them right after the game. I’m not interested in this ‘wait until Monday’ attitude.”

Read a report of the interview on club’s web site.

According to Ali Martin of The Sun, the Home Office will reject Anderson’s application for a work permit, who will move to Old Trafford for £17 million. The Brazilian has not played 75% of the international the Brazilian national team played in last two years. Anderson is selected for his national team for this summer’s Copa del America.
United will appeal if the application is rejected.

No new contract for Smith

Alan Smith’s hopes have not been fulfilled and has not been offered a new contract. But the winger has stated he’d love to continue playing for ManUtd.

And last but not least, ‘Hi, my name is Franky and I will start posting here regularly’.
Expect several changes, updates to the site and a competition for the next season to be announced.
Comments have been reopened. :)