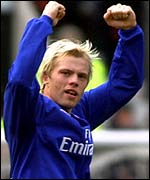 Out- of-favour striker Eidur Gudjohnsen wants to come to United.

It is understood that Gudjohnsen has held informal talks over his future at Stamford Bridge and the two parties are due to sit down again in the next fortnight.

Tottenham are being linked with the striker as well but United would be his choice of future employer.

Sir Alex Ferguson values players who can play in more than one role and Gudjohnsen’s midfield capabilities as well as his ability to fill a berth in a two-pronged attack would make him a versatile addition to the Reds squad.

Gudjohnsen moved to Stamford Bridge from Bolton for Ł5m in 2000 after two years at Wanderers.

His Chelsea strike-rate has been good with 78 goals from 177 matches.

However the Icelandic international has only started 16 games for Jose Mourinho and has been replaced in 10 of them scoring just three goals.

Gudjohnsen is frustrated at his lack of first-team opportunity and the Reds will be monitoring the situation.

The question mark over Ruud van Nistelrooy leaves Fergie needing a back-up plan and Gudjohnsen’s adaptability could make him a target.

Fergie has Wayne Rooney and Louis Saha as the main hitmen if van Nistelrooy does depart while Ole Solskjaer and 19-year-old Giuseppe Rossi provide other options.

But there would still be a vacancy for a player of Gudjohnsen’s versatility.

With the bulk of the United manager’s transfer kitty earmarked for the problem midfield department there would be little cash left over for a major import up front.

If van Nistelrooy were to go, that could bring in around Ł10m and 27-year-old Gudjohnsen could be prised from Chelsea for about Ł4m, leaving more money for Ferguson to bolster his engine room.