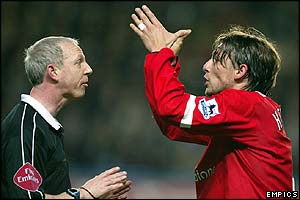 The 27-year-old has not played since rupturing cruciate ligaments in a Champions League encounter with Villarreal in September. But Heinze has returned to full training and boss Sir Alex Ferguson said to the Mirror that he was close to full fitness:

“Gaby’s been training for three weeks and is looking fantastic. He has been tackling like a tiger. He has shown great energy in training and his enthusiasm is infectious.”

Ferguson has vowed to do everything in his power to help Gabriel Heinze achieve his World Cup dream. The Argentina full-back appeared to have no chance of making Jose Pekerman’s squad when he was carried off in agony having ruptured cruciate ligaments in a Champions League clash with Villarreal in September. But Heinze has astounded Ferguson and his Manchester United backroom staff with the speed of his recovery.

So impressive has the 28-year-old been in training that the Red Devils chief named the popular full-back on the bench for the Barclays Premiership encounter with Sunderland.

With only four games to play – including Roy Keane’s testimonial – and a title battle still to be fought, Ferguson cannot afford to take any chances with his line-up and in-form Mikael Silvestre is unlikely to be ousted from the left-back role.

But Ferguson has promised Heinze he will involve him as much as possible over the run-in and is confident that by the time Pekerman has to name his final 23-man squad on May 15, the former Paris St Germain star will be fit and ready.

“Looking at Gaby in training, in a month’s time, he will certainly be ready for a big competition,” said Ferguson on ManUtd.com.

“He is desperate to play and his performances in training have been fantastic. Every player who comes through the type of injury he has been through is bound to have some sense of trepidation, wondering if they are going to be okay. But he has got stuck right in and never showed any inhibitions. He is an adventurous player and a committed player. That is why the fans love him.”

Having seen Heinze spend so long on the sidelines, it would be understandable if Ferguson preferred the combative defender to write the current campaign off totally and return in pre-season fresh and raring to go. However, as a relative latecomer to the international scene, Heinze is determined not to let the big occasions pass without a fight. It is less than two years since he defied Ferguson by appearing in his country’s gold medal-winning Olympic campaign in Greece and the United boss knows there is no point trying to hold him back.

“If Argentina pick him, FIFA rules say the player has to go,” confirmed the United boss.

“What we should do is give him every opportunity to be there. Gaby is 28 now. You cannot deny him the chance of playing in the World Cup. It is the biggest tournament for any player and we have to try and help him. The problem is we only have 4 games left and Mikael Silvestre’s form has been fantastic. The best we can do is give him parts of games and try to impress on the Argentinian medical staff and coaches that he is all right for the World Cup.”

The United fans will be keen to see Heinze back next season with Man United’s new, successful signings- such as Ji-Sung Park.….