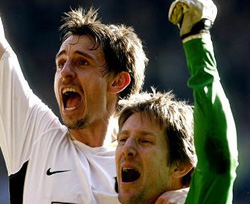 And the break taken in consideration, things don’t look that bad on the injury front actually and SAF can expect soon to work with a rather complete team again.

Tomorrow evening Gary Neville is expected to return on the competitive pitch and play the reserve game against Loserpool and start gaining much needed match rhythm after he resumed full training late September.
The thought of Gary Neville joining our defense again is a rather exciting one. I am looking forward to see a rotating 3 men defense with Rio, Nemanja, Gary and Patrice constantly altering the positions, allowing one back to enjoy offensive freedom and the third defender providing close cover to our offensive midfield. Rio and Vidic might worldwide be considered as the best defensive central duo, but with his experience Gary surely can easily swap position with both Rio and Nemanja at times.

Both Hargreaves and Vidic are out for several more days, Owen recovering from a tendinitis injection and Nemanja recovering from a concussion. Both are expected to pick up training at the end of the week again.

John O’Shea suffered a dead leg on Saturday and there’s no doubt our excellent medical staff will have him fit again ASAP.

At the moment of writing, VDS still is listed on the Dutch Football Association page to join the national selection tomorrow, but Marco Van Basten, one of the Dutch managers, precautiously has selected a third goalie as well. Anyway, those some days more should give EVDS enough of time to recover.

Silvestre, Park and Foster all are long-term injured.
And then there’s Saha… well, he’s Saha. One never knows.