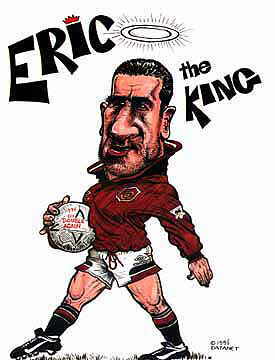 It seems that no matter how long ago he left the club, King Cantona just can’t get out of the news when it comes to Manchester United….

In a recent interview with the BBC, Cantona announces his fear that Wayne Rooney’s top-flight career could be over within five years.
Rooney, 20, is already a key player for United and England but Cantona is worried about his lifestyle.

“Rooney can be the best in the world at 25 if he knows you need to train hard, go to bed early and be careful what you eat. But he could also be out of the best teams, out of England, out of the best 100 players. Completely out. Rooney is still young This is very, very important. All the best players in the world knew all the time these kinds of things are very important. I am sure Alex Ferguson is very strong and will help. Rooney is still young. But somebody needs to say it to him. The last time I saw him I wanted to say it but I saw him only quickly.”

The former France international, 39, points at Robbie Fowler as an example of a teenage talent who has not fulfilled his full potential:

“Fowler was so good at 18, and four, five years later, at 23 or 24, finished, not even playing regularly for England, not even for the best teams. Finished. Completely. Out. Why? Clubs should ask why this kind of player is out. They say in England it is very difficult because of the media pressure. But it is not more difficult than in Italy, Spain or Brazil.”

And then in another interview conducted with The Daily Telegraph, Cantona expounds on how he wants Cristiano Ronaldo to develop his prowess in front of goal. The United legend believes the 21-year-old winger has the potential to become one of the game’s top players, providing he can make a more telling contribution in the scoring stakes.


“Cristiano Ronaldo could score more goals. He gives the ball, a nice cross from left or right, and he doesn’t care. He doesn’t go to the goal. What does he have to do? He has to run 30 metres. He is young and can improve. He will become – could become – one of the best if he wants to score goals. He does a lot of things right. He will score maybe 10 more goals during the season. And it is important to score goals.”

Ronaldo currently has seven goals to his name this season. To date, he has an overall total of 23 goals in 122 games since his arrival at the club in the summer of 2003. It seems that nothing gets past the great Frenchman! You can find some great books, including Cantona’s autobiography, at: The Ji Sung-Park Online Shop. You can also buy some Cantona memorabilia through one of our sponsors: Kitbag