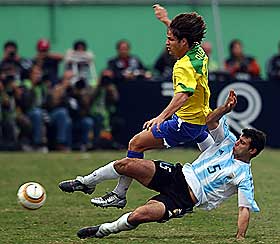 Manchester United turned down the opportunity to sign Argentine midfielder Javier Mascherano on two occasions during the summer.

On Thursday, Mascherano, 22, and striker Carlos Tevez, 22, signed for West Ham from Corinthians of Brazil on permanent deals for undisclosed fees.

Meanwhile, Gill remains upbeat over the chances of a new contract for striker Wayne Rooney.

England international Rooney, 20, wants to extend the six-season deal he signed when he joined United in August 2004.

“His eagerness to sign a long-term deal is great. I think there will be developments over the next few months. We want to tie him down to the club.”