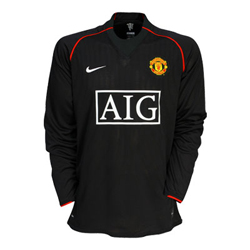 We have been waiting several weeks for this day to happen, but finally the day has arrived and the new Away Kit for 2007/2008 can be preordered at United Direct, the ManU online MegaStore.

I’ll admit being a sucker for anything black, but this kit has everything! The same pattern we already know from our awesome home kit, stylish ManU Red lines down the shoulders and our proud badge! This kit is an all time classic already and will be available on 13.09.2007, with the away game against Everton scheduled for Saturday 15th September 2007.

Gabriel Heinze’s future has finally been sorted. The Argentinian international has opted for a future at the Bernabeu, sporting the colours of Real Madrid, along RVN. Real and ManU have agreed an £8mm move.
No matter what has happened, it is sad to see a great player who had won the hearts of many fans, leave OT and go play for another team. Tough-tackling Gabby has long been one of my favorite players, already when he played at Paris Saint-Germain. But that’s sport, isn’t it?

In other news, on Sunday I will be live blogging again. On the agenda our home game against Spurs, and although last years Spurs weren’t always an easy team to play, I’m sure that we’ll bend the curve and it will be a day to forget ASAP for Martin Jol.