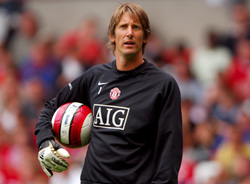 Today was a rather bitter day for our junior squad ManU. We were eliminated mercilessly by Coventry in the Carling Cup. Sadly I didn’t have the opportunity to view the game and can’t say much about the game.

SAF’s bet to start with no senior player has proven to be an expensive one. The quadruple won’t be for this year. Period.