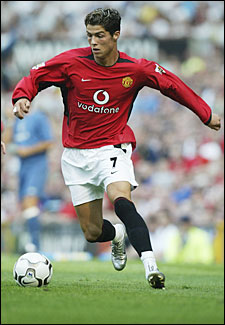 Cristiano Ronaldo and Wayne Rooney teamed up for the first time since the World Cup to help Manchester United thrash hapless Fulham.

Louis Saha headed United in front on seven minutes before his cross forced Ian Pearce to divert into his own net.

Rooney tapped in before crossing for Ronaldo to make it four in 19 minutes.

Fulham pulled one back when Rio Ferdinand deflected Heidar Helguson’s effort into his own net but Rooney wrapped up the victory after the break.

Sir Alex Ferguson and his players had stressed the need for United to begin the season firing on all cylinders – but they could not have dreamed of a start like this.

Ronaldo and Rooney competed in the same United side for the first time since their World Cup quarter-final disagreement, and the pair responded with some delightful interchanges.

However, they did have the luxury of playing against a shambolic Fulham defence.

United went ahead when a superb cross from Ryan Giggs fell between Pearce and Liam Rosenior, allowing Saha to head home his third goal against his former club.

Pearce then got in front of Rooney to try to cut out Saha’s low cross from the left but could only steer the ball into his own net on 14 minutes.

With Fulham in complete disarray, Rooney sidefooted a third after Antti Niemi had parried Saha’s volley before turning provider for Ronaldo to half-volley home a fourth with just 19 minutes gone.

It could even have been much worse for Chris Coleman’s side by the time they headed for the changing rooms at half-time.

Rosenior cleared a dangerous Giggs corner off the line and Paul Scholes saw his venomous strike cannon back off the foot of the post.

Fulham’s first-half display did not merit a goal, but they found the net when Helguson’s shot hit Ferdinand and looped over the stranded Edwin van der Sar six minutes before the break.

Michael Brown was fortunate to escape with only a yellow card for a horrible two-footed lunge on Giggs after the interval.

The usually placid Giggs was clearly upset and was booked for a clumsy challenge on the Fulham midfielder before both players were substituted.

United extended their lead again with a devastating attack on 63 minutes.

Ronaldo picked up the ball from Scholes and fed the overlapping Wes Brown, who pulled it back for Rooney to shoot low into the corner.

United took their foot off the pedal as the clock ran down, but Fulham were too shell-shocked to take advantage.

Not even close….Cristiano Ronaldo won the fans back with a dazzling all-round display.