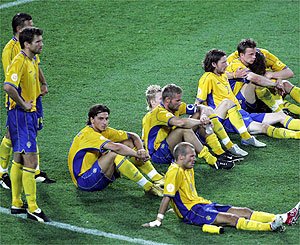 Rooney, having played 33 minutes as a substitute against Trinidad and Tobago and showed no ill-effects after his broken metatarsal injury- will definitely play against Sweden.

“The medical people say he can play more than 45 minutes, so if that is the case it is better he starts the game,” said England coach Sven-Goran Eriksson to Sky.

Gerrard would be suspended for the last 16 clash with either Ecuador or Germany if he was booked, and Eriksson is keen to ensure he is available for the knockout rounds.

Frank Lampard is also on a yellow card, but the Chelsea midfielder is expected to play against Sweden.

“Marking Rooney is a nightmare and he is looking sharp and ready to go. Rooney would tell you he had 160 minutes in him as long as he playing, his touch is good and he looks sharp.”

England go into Tuesday’s match in Cologne knowing that their place in the knock-out stages is secured following their group wins against Paraguay and Trinidad and Tobago.

They will win Group B, provided they avoid defeat against Lars Lagerback’s side – although they will be aware they have not beaten Sweden in 11 attempts since 1968.
To catch the latest news on the World Cup., visit the hottest soccer fan site on the net right now, Ji-SungPark.com, with its dedicated RSS feed.