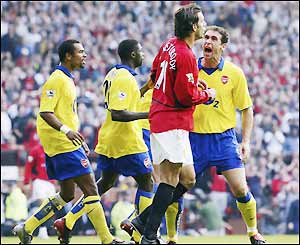 Ever since the League Cup Final, the rumours of RVN leaving Man Utd have just refused to go away…..

Van Nistelrooy’s agent insists he has not been in contact with United over a new deal for the striker. Reports earlier this week suggested that the Reds had offered the Dutch striker a fresh deal to stay with the club. This, after a cheeky 7 million pound bid by Spurs.

“I’m not aware of any discussion about a new contract. No one has contacted me about this. All I can deal with are the facts and the fact is that Ruud has two more years on his contract. There is nothing more to say.”

Speculation about Van Nistelrooy’s future has further arisen over the last few weeks because of his relegation to the bench for the last three games.

Sir Alex Ferguson has played down ‘stupid talk in the media’ concerning Ruud van Nistelrooy, insisting competition for places at United is healthy.

The Reds boss again selected Louis Saha ahead of the Dutchman for the 2-0 win against Newcastle on Sunday but insists Saha currently deserves to play on merit.

Fergie said to The Sun:


“I did not want to change a winning team. There has been all this stupid talk in the media but the main question I have to answer is ‘does Louis deserve to play?’ I think he does. His scoring record has been good and he has developed a good combination with Wayne, Ronaldo and Ji-Sung Park– so I am doing the right thing by him. Competition brings more out of players. It is a healthy situation for the football club.”

Apart from Louis Saha, one player who might be smiling in the background is young Giuseppe Rossi…..