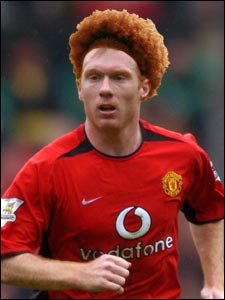 Sir Alex Ferguson has refused to rush Paul Scholes back into action despite the former England international making a surprise appearance at training.

The Manchester United midfielder, 31, injured his eye in December which left him with persistent blurred vision.

Scholes was told to take a three-month break and Ferguson insists the club will stick to that initial schedule.

Fergie said to The Mirror:

“The prospects are a bit more positive in terms of when he will be back, but we are not rushing him. Paul is coming on, there has been a good improvement in him and he came into training the other day, which was good to see. But we will not be rushing him. If he is back for the start of next season I would be delighted.“

This is good news for a depleted Man United midfield- especially with the recent broken leg of Alan Smith. Of first team choices- United are really left with just four natural midfielders: Fletcher, Giggs, Ronaldo and Ji-Sung Park, with Richardson and O’Shea helping out as makeshifts.

Fergie was also reported in the BBC as saying that he feared Louis Saha would quit:

“If I didn’t play Louis in the final after he had scored so many goals, he might say ‘I can get a regular place somewhere else’,” Ferguson said. He scored goals throughout the competition, including in both legs of the semi-final, which is some feat. He deserved to play in the final and everything else is secondary.”