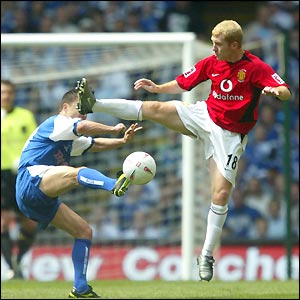 Paul Scholes believes he is on course for a return to the Manchester United side next season, despite still being hindered by a blurred vision problem. The midfielder has not played since December because of the condition, which initially went undiagnosed because of its rare nature.

But the 31-year-old told Century FM:

“My aim now is for next season. It has been four months now so I’m not sure it will be completely normal but I should be OK to start playing again.”

The former England international has actually resumed light training at United’s Carrington training ground but will not undertake contact work until after the end of the current campaign.

And Scholes admitted he has been concerned by his eye problem.

“I don’t really know why it happened,” he added. “Apparently, it is something quite rare in people my age. I was a bit worried but it has been more frustrating than anything else because, while as a footballer, you expect to pull muscles, this was something completely different. Unfortunately, it has happened to me and I just have to get on with it. I didn’t ever think I had played my last game or anything like that. I was just determined to get it right and the sooner I could get back the better. As long as I’m ready for next season, I will be happy.”