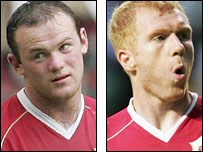 Manchester United duo Wayne Rooney and Paul Scholes have both had their appeals against three-match bans rejected by the Football Association.

The pair were dismissed in a pre-season friendly against Porto for violent conduct and serious foul play by Dutch referee Ruud Bossen on 4 August.

The bans start on 23 August, allowing Rooney and Scholes to play in United’s opening league game against Fulham.

But they will miss the fixtures against Charlton, Watford and Tottenham.

United have refused to comment on the decision, but are unlikely to be pleased.

Manager Sir Alex Ferguson had been confident that the punishments would be downgraded to yellow cards – and earlier this week said: “I am surprised it has carried on this far“.

Ferguson was particularly angered by Rooney’s straight red card for catching Porto’s Pepe in the face while challenging for the ball.

Rooney himself said of the incident:

“I feel a bit let down. If you watch the video, I did not take my eyes off the ball once. On the way down, my hands brushed against the player. There was not much contact but the lad went down and stayed down.”

Scholes was sent off in the second half after he picked up a second yellow card following a clumsy tackle.

But an independent commission rejected United’s claims for wrongful dismissal and United were informed on Tuesday.

“The bans will start from Wednesday 23 August, 14 days on from the day the FA received the match officials’ report from the Dutch FA,” said an FA statement.

“Rooney and Scholes were sent off for violent conduct and serious foul play respectively.”