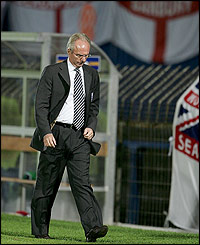 England boss Sven-Goran Eriksson is poised to take striker Wayne Rooney to the World Cup, despite his broken foot, according to the Daily Mirror-:

“Wayne is a world-class player and we will give him every chance to play in the World Cup; with such a huge talent you have to do that,” said Eriksson.

He insisted England were “one of four or five teams who can win the World Cup and this will not change that“.

And he added that he had received “very encouraging news” about Michael Owen, who is recovering from a foot injury.

“I have spoken to both Wayne and Michael today and the news I have received from the doctor about Michael is very encouraging. As with Wayne, we will know more in the next few days.“

England’s first game of the World Cup is against Paraguay on 10 June – six weeks away, the period predicted for Rooney’s recovery. Eriksson said that while he was hopeful of Rooney playing a part in the World Cup, England still had a good chance of winning it if the Manchester United star did not recover in time for the showpiece tournament.

Rooney, 20, was injured in a tackle with Chelsea defender Paolo Ferreira towards the end of United’s 3-0 defeat on Saturday – a result that gave Chelsea their second consecutive Premiership title. Rooney is seen as an integral part of England’s bid to win the World Cup in Germany. He broke a bone in the same foot during England’s quarter-final defeat by Portugal in Euro 2004. His absence was seen as a major factor in England’s failure to progress to the semi-finals.

But Eriksson said to Radio Five:

“While losing a top quality player like Wayne for the tournament would obviously be a concern, I strongly believe we have many world-class players in the squad. I understand the injury news is a blow to every England fan but it is vital that we all remain positive so we can achieve success in Germany.”

Eriksson said he would “continue to speak to the medical staff at Manchester United, who have been very helpful“.

The World Cup knockout stages are scheduled to begin on 24 June – eight weeks away – with the quarter-finals due to begin seven days later. Eriksson will name his provisional World Cup squad on 8 May and his definitive one by 15 May. Under Fifa rules, coaches can replace players injured after the 15 May deadline, but not those that picked up knocks before that date. Rooney’s position is remarkably similar to that of England captain David Beckham before the last World Cup in 2002. Then, Beckham broke his fifth metatarsal nearly eight weeks before the start of England’s World Cup campaign. And while he played from the start of the tournament, he was clearly not fit – a fact he later admitted.