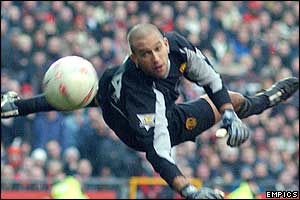 The formalities have yet to be completed, but BBC Sport understands it has been agreed by all parties.

United boss Sir Alex Ferguson has allowed Howard to move to Everton in the expectation he will return in a position to succeed Edwin van der Sar.

Everton’s move for the 26-year-old American keeper puts doubts over the future of Richard Wright.

Howard languished in United’s reserves since the signing of Van der Sar, but Ferguson is unwilling to contemplate a permanent sale because he still regards the keeper as having massive potential.

Everton hope veteran Nigel Martyn will provide cover by signing a new one-year contract if he proves his fitness after ankle surgery.

Howard is under contract at Old Trafford until 2009, but Everton will test Ferguson with a formal bid if he impresses next season.