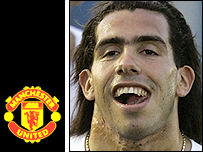 Knight inexplicably allowed Nani’s cross to drift across the face of goal, and Rooney arrived at the far post to score with a simple side-footed finish. And Knight was again at fault as Rooney put United in front two minutes before half-time, getting caught out of position as Tevez’s clever pass played in the England striker for a composed strike past Carson. United’s ended the first 45 minutes by adding a third, courtesy of a moment of calamity in the Villa rearguard.

Gerard Pique’s header was cleared off the line by Young, but when Rio Ferdinand reacted first, Gardner could only lash his attempted clearance into his own net. Villa boss Martin O’Neill made a double change after 52 minutes in an attempt to revive his side’s hopes, sending on Shaun Maloney and Isaiah Osbourne for Gardner and Luke Moore. But they suffered a blow seven minutes later when Reo-Coker, who had already been booked, was sent off by referee Rob Styles for a late tackle on Anderson.

And matters became worse after 66 minutes when Carson upended Tevez as he looked poised to score, leaving referee Styles with no option other than to show his second red. Reserve keeper Taylor came on, and made a significant contribution with his first touch, diving to save Rooney’s penalty. Rooney then struck the bar from Wes Brown’s cross as United threatened to run riot.
It was in danger of becoming a very messy evening for Villa as United added a fourth with 16 minutes left. Giggs jinked his way into the Villa penalty area and his shot took two deflections before looping past Taylor.

Man Utd Blog Man of the Match -: Tevez. Didn’t score, but round circles around Villa’s defence.