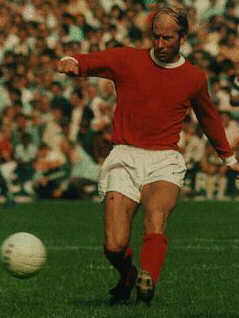 Man United Blog brings you the seventh part of its look at MU History, covering the period 1960-1969.

After building one of the greatest teams seen in England, Matt Busby had to start all over again at the start of the 1960’s. The Munich air disaster had robbed him, and football, of some of the era’s greatest players. But the great manager was never one to sit still for long. Once he had recovered from his own injuries, he set about building another side to take the world by storm. Dennis Viollet was one of the leading names within this team. In 1959/60, the Munich survivor broke Jack Rowley’s club record by scoring 32 goals in one league season. The team in total scored 102, but they conceded too many (80) at the other end and finished in seventh place.

Viollet wasn’t the only player to survive Munich and enjoy a great career at Old Trafford; others included Bill Foulkes, and Bobby Charlton, who came through the club’s youth ranks to break goalscoring records for club and country. Nobby Stiles followed the same path, from youth team to first team, while Denis Law came the more direct route, by record ?115,000 transfer from Torino. United’s form was erratic at the start of the decade, while the new names settled in, but then everything came together with a run to Wembley for the 1962/63 FA Cup Final. Matt Busby’s new-look team beat Leicester City 3-1, with two goals from David Herd and one by Denis Law.

The next season saw United build on the foundations of FA Cup success to challenge for the title- United finished second, only four points behind the champions Liverpool, to whom they lost both at home and away. The 1962/63 season was also notable for the signing and debut of George Best, the young man from Belfast who would become football’s first superstar. It was a case of Best by name, best by nature. His incredible skill, pace and control left opponents in knots, making him a hit with the fans, while his filmstar looks made him a hit with the ladies.

In 1964/65, the famous trio of Best, Law and Charlton took United to new heights. They won the League Championship, pipping Leeds on goal difference, and reached the semi-finals of the European Fairs Cup and the FA Cup. Law plundered goals galore and was named the European Footballer of the Year.

The title-winning team seemed to be the finished article but they took their foot off the gas during the next season, 1965/66, losing the title to Liverpool again and finishing fourth. Two cup runs, with United losing in the semi-finals of both the FA and European Cups, seemed to take their toll towards the end of the season. The highlight had been the 5-1 away thrashing of Benfica in the European Cup quarter-finals, when Best had been in blistering form. In 1966/67 United were crowned League Champions again, with Law scoring 23 goals in 36 games. The title success secured another season of top-level European football in 1967/68. Hibernians, FK Sarajevo, Gornik Zabrze and Real Madrid were swept aside as the Reds marched towards the European Cup final at Wembley. Benfica put up a good fight in the final. Jaime Graca equalised Charlton’s headed goal to take the game into extra-time; in fact Benfica might have won the match in normal time had Alex Stepney not saved superbly from Eusebio. Best, Brian Kidd and Charlton bossed the added half-hour, scoring one goal each to crush the Portuguese champions 4-1. The European Cup was heading to Old Trafford for the first time. Just 10 years after Sir Matt had seen his dream team destroyed by tragedy, he had performed the impossible. He was knighted soon afterwards.

It was a case of after the Lord Mayor’s show in 1968/69. The European Champions could only finish eleventh in the league, and they were knocked out of the FA Cup in the sixth round and the European Cup at the semi-final stage. They also lost the World Club Championship 2-1 on aggregate to Estudiantes. Despite the anti-climatic end to the decade, United fans could feel delighted with the 1960’s. Few could begrudge Sir Matt Busby’s decision to retire at the end of 1968/69, after all he’d achieved.

This dramatic and perhaps most successful period on Manchester United football club is covered in some excellent books which you can find at The Ji Sung-Park Online Shop. You can also but some wonderful memorabilia through one of our sponsors: Kitbag