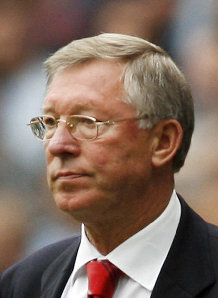 I don’t think you can even say City were lucky because we had so many opportunities to win it ourselves, so it is our own fault, we haven’t won it because of our own disappointments in the last third of the field.

No shit, Sherlock! You should never have put your own ego above the ego of one of the most prolific strikers ever. RVN!

Weren’t your words ManU isn’t about one person? No matter what you’ve won, looking at everyone who was a genuine star and left us last seasons, there seams to be ONE PERSON who rules everything. SAF!

Jaap Stam. No comment. You don’t become a central player in the Milan AC defense if you don’t have the quality. This Dutch man, driving a simple Ford Mondeo, had everything. A big mouth too. And that with reason.

Juan Veron. OK, everyone will hate me for this, but just look at what Veron did last season. Why do SAF and Queroz give any young player two years to perform, to grow to the level ManU requires, but they didn’t with Veron. Veron got axed after only some games and never got the backup, everyone else got, from SAF and us, fans.

Becks. No word
The difference between any top level coach and SAF becomes obvious when it comes to the point of Becks. Trappatoni kicks Becks in the balls and what happens? Becks (and RVN) win the title for Real.

Keane. Lets be honest guys… what Keane said in that interview was true. Brown has grown, so have others. And why would you screw up a United legend? Because he had a big mouth? Even though he spoke the truth?

RVN? Let his numbers speak for him: 201 appearances, 150 goals!
No one ever, for any club has reached this rate over 5 years!
We miss Ruud, we need Ruud!

3 Games and we must be close to 70 attempts/chances. But our conversion rate looks like Michael Vaughn’s run rate this summer. Fergie you’re getting old and today you made me feel like the Dutch national team or Arsenal. Play great (?!) football, but never win anything. Luckily the number 13 eases the pain. Because that’s where City will end up in May anyway. Sucks to be a City fan, but you don’t win the League or qualify for Europe after three games.
For you, SAF… time to retire. Best time to retire would be to win everything this season, but that’s going to be a tough challenge. And please… don’t get a new French c#@t, leave Anelka where he is. His mouth is just as big as yours!