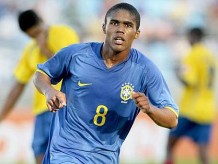 After initial negotiations for the Brazilian U20 international Douglas Costa were reported to have failed, a move seems to come closer every day now. ManUtd was said to offer the Brazilian a 3 weeks trial before wanting to finalize a move, but Gremio considered the player, who’s hailed as the new Robinho too good for a trial. Initial reports hinted at a £12m offer for the international but Gremio is holding out for around £20, close to the buy-out clause in the youngster’s contract. Negotiations are on going but we know the line, SAF gets who he wants. END_OF_DOCUMENT_TOKEN_TO_BE_REPLACED