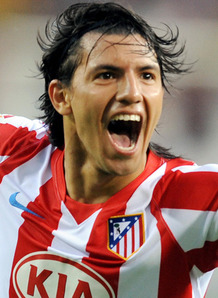 I think only SAF will be able to decide this one but as far as I’m concerned my preferences go to the Argentinean international. He’s fast on the counter and although very often he will penetrate too deep ((Often almost to the rightpost)) he still seems to have the eye for the incoming striker. Huntelaar from his part has a much more powerful shot from the second line, something we have missed ever since the glory days of Paul Scholes. Something Benzema could have brought us, but also something we can expect from Michael Carrick when he finally discovers his distance shot again.

If the same rumours who broke the news about Aguero can be believed chances to land the young international seem to be rather high, especially considered that SAF is said to first have made a £34m PLUS Nani offer but this one was refused by Atletico. Obviously Atletico will not accept Berbatov at the same value as we signed him last season at ((£30.25m)) but the first offer made could be decisive and point at a higher cash offer plus the Bulgarian striker. There seems no doubt about that Aguero could become the most expensive player in the history of English professional football. Or should we still focus on Huntelaar, who has been allowed to speak with VFB Stuttgart for the nowadays rather meager sum of £19m?
It just baffles me that an international talent would want to play for VFB Stuttgart if several other Champions League options are available… especially teams with a potential to reach the finals such as our Theatre of Dreams squad.