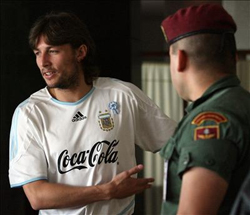 Heinze and Liverpool have called the help of the Premier League to resolve the move of the Argentinian player to the Merseyside club. The hearing is finding place on August, 20th, some days before the transfer window closes. But as if all this wasn’t negative enough yet, Heinze has seen the need to publicly hit out at SAF and ManU.

I want a quick solution. My lawyers have told me a meeting with the Premier League is possible to advance the matter next week…

…The club had guaranteed my transfer if a good offer came in and nobody specified anything about the club whether it be a foreign team or Liverpool.

…I am a total professional and I have always behaved as such. Now I just ask that they respect me and accept what I was promised.

It just amazes me, that a guy who is otherwise that involved in his style, can become this desperate. Desperate for a move to just another bench. Honestly, if Heinze with his actual performance moves to the Merseyside, he certainly IS NOT going to start many games. There is no way that he’ll get the nod on Riise, who has been one of the most important players for Liverpool over the last years now.