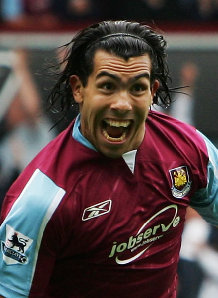 Rumours, rumours and more rumours. But according to an entry over at TeamTalk WHU is set to release Tevez’s registration tomorrow.
Talks between Kia and West Ham are rumoured to have reached an agreement, resulting in a meager payment of £1 to £3million for the Hammers. FA still has to ratify the agreement. West Ham’s Eggerts also confirmed he hopes that the move can be finalized within the next 24 hours.

‘Wait and see’, tells my brain me.

Newcastle have confirmed an agreement with ManU over Alan Smith.

OK, we lost. We lost a friendly against the Italian defending champions. We sucked during first half, especially the defense. But after the break improvement could be seen. We played much more organized. I’m sure this game was a great wake-up after the Asia Tour hype.
Kevin from Football Gossip.com uploaded a video of the goals at Youtube.

Our second goal showed what could become a major problem on set pieces this season: an offensive aerial force of ManU is inexisting.
Nevertheless, I can’t wait anymore. Sunday it’s party time! Jose, here we come!