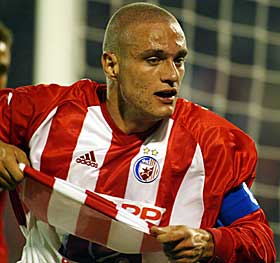 Nemanja Vidic trained with Manchester United for the first time on Thursday after completing his move from Spartak Moscow. The 24-year-old Serbian defender has been granted a work permit and has completed all the formalities on his deal with British media reports suggesting the fee to be around seven million pounds ($12.14 million).

Man United announced: “The player has signed a four-and-a-half year contract which will see him at the club until June 2010.”

Vidic is eligible for United’s FA Cup third round match against minor league Burton Albion on Sunday. Vidic joined Spartak from Red Star Belgrade in 2004 and is part of Serbia & Montenegro‘s “famous four” defence which conceded just one goal in successfully qualifying for the 2006 World Cup finals in Germany.

“Good defenders win you things and this lad is really natural and athletic. ….Nemanja is a quick, aggressive centre-half and at 24 will be a terrific addition to the squad.”

Belgrade journalist Zoran Panjkovic, who has followed Vidic’s career since he broke into the Red Star side as a teenager, said to the BBC :

“He’s a really great defender and it is a very good move for Sir Alex Ferguson. He is a key member of the Serbia and Montenegro team that conceded only one goal in qualifying for the World Cup. Only Raul scored a goal against them and Vidic was the star of that defence. He is similar to Rio Ferdinand but maybe with a bit of John Terry’s qualities as well. He is a very aggressive player and very physical. I think he will be a really special player in English football. And I think he will form a formidable partnership with Ferdinand. At every corner he is a danger. His style is always to take up the goalkeeper’s ground and he has scored some crucial goals.”

United beat off competition from Liverpool and Fiorentina for Vidic, who had made clear his intention to move on. It is the first signing since Man United brought in Ji Sung-Park.