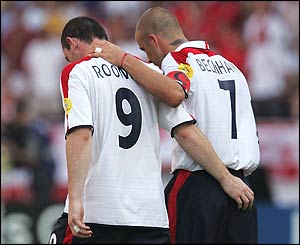 David Beckham watched in disbelief from the England bench as Wayne Rooney was sent off in England’s World Cup quarter-final loss.

Beckham had only just come off injured and dried the tears from his eyes when Rooney was sent off in the 62nd minute after stomping on Ricardo Carvalho’s groin after a rough challenge by the Portugal defender.

The score was 0-0 at the time. No goals were scored in regulation or extra time and the game went to penalties. England lost 3-1.

Beckham understood Rooney’s frustrated face more than most. He was the last England player to be sent off when he got two yellows in a World Cup qualifier against Austria last October.

He was also the last England player to get a red card at the World Cup – and that sending off also led to a penalty shootout and elimination.

Beckham said referee Horacio Elizondo should have given a foul in Rooney’s favour just seconds before the sending off.

“He had two players on his back, if the referee had given that there would not have been this situation,” Beckham said to the Daily Mail.

“The situation happens and that’s the way it was.”

Rooney didn’t talk to reporters. He was the first player to board the bus, walking past the waiting media with his head down and flanked by two minders.

Beckham was confident Rooney would bounce back:

“Without a doubt,” he said. “Wayne’s our future and that’s what people should think. People get sent off in football, that’s the way it is sometimes.”

It isn’t the first time Rooney’s passion – often credited as a reason why he’s so talented – has got him and his team into trouble.

In last September’s surprise 1-0 World Cup qualifying loss to Northern Ireland, Rooney lost his temper after a series of fouls and, when team-mates including Beckham tried to calm him, he responded with a stream of expletives.

The previous season, England manager Sven-Goran Eriksson had to substitute him in a friendly match at Spain because his tough challenges and wild play were in danger of getting him ejected. He’s also been sent off while playing for Manchester United in a Champions League match after sarcastically applauding a referee.