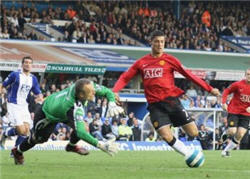 We needed a superb save by Kuszczak who had replaced the injured EVDS at half time, and Rio who saved on the line in first half.
With the eye on our next UCL game, against Rom, there is much to learn from our performance against Birmingham and the problem isn’t really in the offensive department, nor in the defense, but the role of Carrick is an important one right at the moment.
With Tevez, who again played a good game, combining well with Rooney (hardly ever got the ball back from Roon tho, although he regularly stood free, just as against Chelsea last week) upfront and Evra and Brown constantly moving in, Carrick can’t enjoy as much as freedom as he had in the second half of last season and more and more has to cover for Scholes, for the whole midfield.
In absence of Hargreaves, we have no one cleaning behind our attack and the gap both Rio and Vidic leave is too big. Birmingham, and Sporting Lisbon 2 weeks ago, cleverly used this space and had more territorial advantage (52.7%) at the end of the 90 minutes, even though we had 57% possession. Worse even, Birmingham had all together 18 shots (6 on target, 10 off and 2 blocked) and we only had 11 (3-7-1). Keeping our offensive play style in mind, I expect Hargreaves to start against Rom, after a series of weak performances by Carrick ((His performances aren’t exactly bad, but we already have too many people playing forwardly and Hargreaves has more pace)).

Defensively, Rio and Vidic played their usual solid game, although one could argue that they have to attack the ball sooner, play some yards more forward.
Brown played a rather invisible game and let McSheffrey get away in the 56th minute, resulting in a deflected shot and a miracle save by Kuszczack. Watch Kuszczack’s great save here.
Evra played as usual, solid ,but sometimes had problems with Larsson earning a booking for a foul on Larsson.

In the offensive department, things start to improve and even though we only scored once, one can notice it’s only a matter of time anymore before goals start rolling in. Ronaldo was the man of the match, scoring in the 51th minute, winning the ball from Queudrue on the edge of the area. He calmly rounded Birmingham goalie and scored his first Prem goal this season. Ronaldo again went there were it hurts with driving runs and Birmingham had many problems with him.
Giggs, who was replaced in the 64th minute by Saha, was rather invisible again and had 2 chances, both shots he fired high over.
Scholes regularly combined well, both with Tevez and Ronnie, but didn’t find that decisive hole.

Our display was rather poor and with Rom coming to OT, we have to improve in the midfield. We have to move faster, turn the ball round quicker and with Tevez and Rooney upfront there is no doubt that we’ll break open defenses soon again. In the end, we did what champions do: also win when you play badly. We still are second in the table, 2 points behind Arsenal and 5 points above Chelsea, Mr. Terry.