Gaby Heinze request to leave OT for Loserpool has been turned down by an Arbitration Panel.

Heinze claimed a letter from ManU allowed him to join the Merseyside for almost £7mm. Not so much now.

What does this mean now for Heinze? Has his future at OT really become doubtful or is there still a small chance for him at OT?

In my opinion Heinze should still consider to continue his career at ManU. Because, no matter what has happened there’s something special about The Reds and us, the fans. We’ll never condemn a player, nor will Fergie. The only thing ManU fans judge a player on are his performances.
Of course this doesn’t mean that Gaby won’t have an especially warm welcome first time he’d get time in our squad again, but a great performance will make us forget everything what has happened. It isn’t that hard to win the hearts of the Red Devils back, a series of great performances will do! 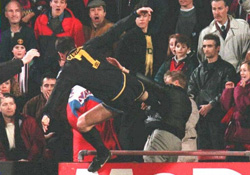 ManU fans require that players give their best and are 200% committed to the Club. When we get that impression from a player we’ll soon forget everything else. Live the Matt Busby spirit: give your everything to entertain and you’ll always be one of us.

Without having to dig too deep in our history it’s simple to remember some players who suddenly were hated and then gained our love back almost as fast.
Admitted, no one before Heinze had expressed the desire to move to a little Merseyside club, but performances are everything that matter to us.

And public enemies such as Cantona, Beckham and more recent Rio and even Ronaldo have shown already that OT hate can be the perfect boost for a great season! And if there’s one player who has the character to fight and win our hearts back… then it’s Gaby.

Of course Gaby could now listen to international offers, but if he did he’d really disappoint me.