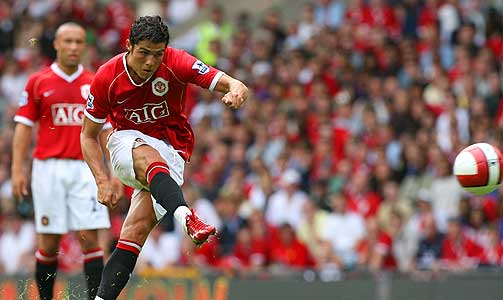 Manchester United extended their Premiership lead over Chelsea to six points thanks to a Darren Fletcher header at Middlesbrough.

United took the lead when Louis Saha converted the penalty won by Cristiano Ronaldo, who was fouled by Boro keeper Mark Schwarzer.

The home side hit back after the break when substitute James Morrison’s low volley found the bottom left corner.

With Chelsea not playing this weekend, leaders United have created more than just a little daylight between themselves and the champions.

And if Sir Alex Ferguson’s players continue to turn out the sort of dominant performance they displayed at the Riverside, then the Premiership trophy might find itself back in the Old Trafford cabinet for the first time since 2003.

United were simply brilliant and laid to rest the ghost of last year’s corresponding fixture when they were humiliated 4-1.

Although, the attacks often bounced from end to end, Boro often lacked the invention in the final third.

The odd one out of United’s attack was Saha, who looked slighly jaded and not on the same wavelength as his team-mates.

Nevertheless, the France striker was on hand to convert the penalty won by Ronaldo, who was adjudged to have been fouled by Schwarzer following a typical driving run.

The Portuguese winger dazzled on the Riverside turf and was unlucky not to score himself, with two scintillating strikes from 25 yards and a fierce free-kick, all saved by the fingers of Schwarzer.

The Boro keeper kept his side in the match going into the break and despite being second best for the first 45 minutes, Gareth Southgate’s men were only a goal down.

The Riverside boss made a tactical change at half-time bringing on Morrison for defender Jonathan Woodgate.

It showed Boro’s attacking intent and that paid dividends midway through the second half when the young midfielder stole in at the far post to smash his low volley past the reach of Edwin Van der Sar.

Unfortunately for the home supporters, they could only celebrate the goal for two minutes.

Not long after the restart, the United wave broke forward. Rooney played the ball to Giggs who in turn found Ronaldo in the box.

The winger’s path to goal was blocked so he returned the ball to Giggs who in turn found the head of Fletcher. Boro fought valiantly until the end, but to no avail, as United marched on.

Ronaldo– love or hate him- he’s a match winner.