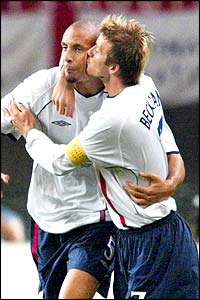 England manager Sven-Goran Eriksson insists he would drop captain David Beckham if the Real Madrid midfielder did not merit a place in the team.

Since the Swede took over in 2001, Beckham, 31, has played every tournament match despite criticism over some of his performances.

Eriksson said to the Sun: “I have taken David Beckham off before. I will do it again if I think he’s not doing the job. He doesn’t have any favours just because he’s the captain. He is treated the same as all the other players in every way – at the dinner table, on the bus, tactically, in training, in a match. I’m prepared to do whatever I need to do if I see things are going wrong. I will do whatever is required.”

The England captain has not yet hit his peak in Germany and was at fault when Marcus Allback was left unmarked to head home Sweden’s first goal in their Group B draw.

Beckham would not be drawn on his form when he addressed a news conference ahead of Sunday’s second round match against Ecuador:

“There are agendas out there but my agenda is to win the World Cup for this team. We’re in a very good situation, in the last 16 and very confident going into the game. I’m not sitting here to discuss my own form – that’s for you guys.”

The skipper was backed by centre-half John Terry, who said Beckham’s passing had been “fantastic” in the tournament.

“He is doing very well. It does surprise me the criticism he is getting. It’s easy to single him out because of his high profile. If the team doesn’t play well he gets singled out,” said Terry.
To catch the latest news on the World Cup., visit the hottest soccer fan site on the net right now, Ji-SungPark.com, with its dedicated RSS feed.