With the barely legal players for UFEA Champions League fixture Manchester United’s young stars have held United’s unbeaten run in Europe as they hold Roma 1-1 for the last fixture in Champions league.

United and Roma both of them already qualifying for UFEA before this match went out lose with their starting line-up.United was represented by majority of reserve players namely Simpson,Pique,Eagles and Dong.Fletcher,Nani,Saha,O’Shea and Rooney were the only ones with quite experience of champions league game. END_OF_DOCUMENT_TOKEN_TO_BE_REPLACED

END_OF_DOCUMENT_TOKEN_TO_BE_REPLACED 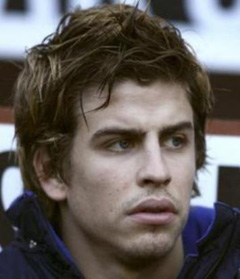 Mikael Silvestre’s injury, piqued up in yesterday’s game against Everton, has been confirmed by OT. The French defender suffers a knee ligament injury and is out for unknown period.

We now officially have a left-back problem, after the departure of Heinze for Real Madrid, but maybe this is the chance for Gerard Pique, the Spanish U21 international, to break through in our first squad, or maybe Jonny Evans.