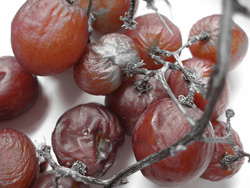 I agree, Roma had several chances and could have scored, but so could we.
Remember Ronaldo’s flagged goal? Why was he flagged for offside? Because the flag already went up BEFORE the deflection. Forget everything everyone has told you along the lines of ‘the deflection has to be voluntarily‘, because honestly… that’s the biggest crap I’ve heard over the last days. Every deflection in that situation IS voluntarily, actually that’s what the defender tries to do, when putting his leg in the fire line. Block the ball, and if due to that the ball is deflected… well, he tried to change the course of the shot. The intention is present. Voluntarily, period. So no offside and Ronnie deserved that goal.

Didn’t Curci knock the ball away in the 35th minute, just before Saha could reach the ball?
Rooney’s volley only two minutes earlier. Just a little high, but those shots usually are whether a goal, whether over or wide. Not much chance for goalies on those volleys.
Nani’s center/cross/shot… struck the bar.

Point is we had just as many chances as Roma and everyone telling me today that Roma could have scored 3 or 4 times was RIGHT, but so could we have. Luckily, both Rio and Vidic performed great again. Just as usual.
Kuszczack also has shown his experience and class in the last 2 games. Not every goalie manages it to force Totti to shoot wide over from that close. It just seems logic to me that teams competing to win the UCL have a solid defense and a good goalie. So did Roma, but our class and another incredible strike from Rooney made the difference. And on that level, many times one action makes the difference. No matter if ManU or AC Milan or Inter. UCL teams are top of the bill and the top 6-8 squads hardly ever under perform.

Next point: we only score once, we don’t rave on the pitch.
WTF!

OK, I agree. Of course I’d rather see a game ending 5-2 than 1-0, but that’s not the way modern football is played. Times when a winger was faster than a defender are long gone, defenders are much more physical now and often cover a wider range. Many top teams can easily defend with only 3 players instead of 4 when needed, because better defenders will attack. Just think about Evra this season.

But most of all… ManUtd has been plagued by injuries up front so far and SAF every time had to juggle the squad. Almost everyone has started so far, almost everyone has scored too. We have seen 5 or 6 different line-ups so far. Rotation, to use the words of Benitez, Trappatoni and Hitzfeldt. A requirement nowadays.
We’ve played with and without Hargreaves. Giggs has played up front next to Tevez and Saha, or next to Rooney even. Scholes has played next to Evra, when Ronaldo was suspended, has enjoyed the cover of Hargreaves and the ever moving Tevez in front of him. Or Giggsy upfront. Nani has had a free role, Anderson made his appearances, heck even Eagles enjoyed time.

All in all, our squad has so far not had the opportunity to grow together, certainly not with four new players. This will take time, but no other team so far has played this many players and different line-ups than we have.

And still… we win. 7 Times in a row already. Clean sheet victories. No matter if against Chelsea, Everton or even AS Roma. We’re on a roll and it seems hard to stop us now, and even harder to score against us.
And if someone doesn’t know what happens when there’s a heavy rotation… just look at Liverpool last 3 years. Lets see if Arsenal will continue this roll they’re on once players start to get injured.

Today we can only hope that we’ll score 4 or 5 times against Wigan on Saturday. With VDS back in goal and Hargreaves out for 3-4 more weeks. Read: exempt from international duty to assure Owen gets the time he needs to recover from his tendinitis and doesn’t rush back too early, not because he might be an expensive crock.
I’m done ranting.