After a bomb attack on the hotel Manchester United was supposed to stay in for the game against an Indonesian All Star team, ManUtd cancelled both the trip to Indonesia and game. At least eight people died in the attacks and 50 people or more were injured.
The Australian Football Assosociation had offered to organize a game against Melbourne Victory or Sydney FC but ManUtd refused to take on the offer because it would mean an additional 20 hrs of travel time. Instead the Red Devils agreed to play a rematch against Malaysia XI in Kuala Lumpur on Monday.

Manchester United won their first friendly of the pre-season against a Malaysia All Star team with Rooney, Nani and Michael Owen netting the goals. In a professional manner the Red Devils took a 2-0 lead in front of almost 100.000 fans in Kuala Lumpur. Wayne Rooney slotted the first goal of the game home before Nani the second goal scored. ManUtd seemed to lead the game comfortably until Mohammed Amri Yahyah fired home a stunning long-range effort from outside the box just before the break.

The Malaysians drew level after an error from Ben Foster who was replaced VDS in the second half. Michael Owen, who also came of the bench, scored his first goal for our team five minutes before the final whistle.

Senegalese striker who we signed after a three week trial in December 2007, will sign a 5 year deal with Spanish side Real Valladolid. Manucho only managed to make one appearance in the first squad, last season against Stoke City. During the first 6 months of his ManUtd contract he was loaned out to Pananthinaikos in Greece. After failing to make an impact with the reserves he was loaned out to Hull City for the latter part of last season. 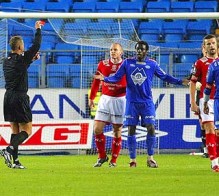 Senegalese talent Mame Biram Diouf has been signed from Norwegian club Molde FK, the same club we signed Legend Ole Gunnar Solskjær from. The Senegalese striker will stay at Molde until the end of the year, trying to help Molde win the title. There are doubts about Diouf being able to obtain a working permit as he hasn’t featured in the Senegalese national squad so far, only on youth level. Sir Alex Ferguson insisted ManUtd had to sign the talented youngster because other European clubs had made bids already. The ManUtd scouting staff has observed Mame Diouf since two years already. Since arriving in Denmark he has scored 38 goals in 73 appearances for Molde FK.

The skyblues continues their spending spree and now also signed Adebayor for a fee around £5m. This means that the Abu Dhabi team has spend more than £100m at strikers only in less than 12 months. Considered their tales from last year this is very promising for when they play away from home, considered their run last season.